Review: Overwind - I Can Do It Again 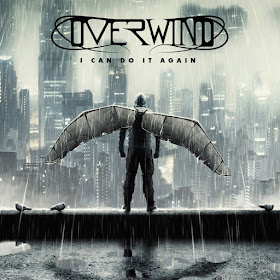 After being formed in 2013, the Russian metallers of Overwind released their debut full-length, titled Illustrator, in 2014. Illustrator was followed by Level Complete in 2015 and an EP called Пятый Рим in 2016. On April the 16th this year, Overwind added a third full-length to that list. This third full-length is titled I Can Do It Again and is released via French label Bad Reputation. About Overwind's line-up, there is one change on this album compared to its predecessor, the vocals are now done by Diego Teksuo. The other band members of Overwind are Misha Gigava (bass), Sergey Krasnozhen (drums) and Anton Emelyanov (guitars). Furthermore Alex Grata (vocals) and Elena "Key" Detkova (backing vocals) can be heard as guests on this album.

From the first moments of opening track Labyrinth a very proggy vibe can be heard. The drums that are added some moments later sound very nice and have a very deep sound. The music Overwind plays is very melodic, but also has its heavier moments. The balance between these melodic parts and heavy parts is perfect. The keyboard/sample-parts, of which I don't know who's responsible for, take care of the extra proggy touch and are very well woven into the other instruments which makes sure they aren't present in an overdone way. Overwind shows on I Can Do It Again that they deliver a lot of variation into their tracks. For example tracks like In Vino Veritas, One More Day and Devil's Game sound a bit heavier than others, Sleepwalker sounds pretty catchy and Dancing Spirits is more calm and epic-ballad-like. Both Dancing Spirits and Sleepwalker sound like perfect tracks for Overwind as closing tracks when played live, while the audience looks backs on a fantastic Overwind-show. The instrumental closing track Time Forward gives some special time to the keys and guitars, both very well executed. That Anton Emelyanov can play his guitar very well can also be heard in the many solo's on this album in, for example, Night Rider, Dancing Spirits or Devil's Game.

Vocally there are clean vocals and growls to be heard, the clean vocals of course sounding more melodic. That Overwind uses two different vocal styles on I Can Do It Again for sure gives an extra boost to the album, it gives an extra dimension to this already very varied release. I Can Do It Again would probably already be very nice with one vocal style, now it sounds extra great and complete.

With I Can Do It Again, Overwind delivers a very nice album. This third Overwind full-length is for sure recommended for fans of melodic metal, prog-, power metal and for fans who like many variations on an album. My personal favorites of I Can Do It Again are the title-track, Sleepwalker, Dancing Spirits and Devil's Game, but the other tracks on this album are also very nice for sure!