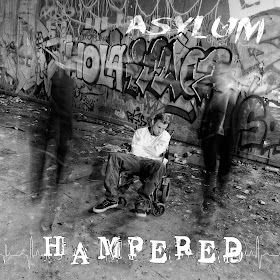 Asylum begins with a French intro ending with a car-accident and a hospitalization. After this intro, Hampered goes full throttle with Asylum's first song, I'm Alive. This first song is also immediately the longest track on this album with a length of 7 minutes. So, it's a pretty daring choice as an opening track.

Musically it is immediately clear that Hampered delivers heavy music mixed with some more melodic parts. Their music on Asylum sounds full of groove and sometimes feels almost like nu-metal. Vocally there are great raw growls mixed with clean vocals, the latter not being to my liking. Something being extra distracting about the clean English vocals is the French accent being very clear in these vocals. However, it is for sure true that there is a lot of energy in the music Hampered plays.

Musically it is heavy and done well. The same goes for the growls, but not really for the clean vocals. So, are the clean vocals the only disadvantage of Hampered's Asylum? Unfortunately not.

Hampered plays their music well at almost every point, but unfortunately it doesn't sound special. Besides that, to me, Asylum sounds more like a collection of single tracks, rather than a full and complete album. Many of the tracks are constructed in the same, pretty simple way: an intro including a track's unique sound, followed by the heavy, groovy music with solid growls, mixed with more melodic parts and clean vocals. At some points the unique sound heard in the track's intro comes back during that particular track. This all is closed with an own outro. Of course, the tracks differ somewhat from each other, but unfortunately this is in a minimal way. The only exceptions on the description above are the aforementioned I'm Alive and the closing track The End, in which Smash Hit Combo's Maxime Keller can be heard as a guest vocalist.

The fact that many tracks have their own intro and outro also doesn't help with making Asylum sound like a complete album. It's also a bit confusing that these intro's/outro's are in French (with Conspiracy Theory's outro as exception), while the lyrics of the tracks are in English.

Personally, I won't play Hampered's Asylum that much anymore, but when you dig Hampered's style and you don't need many variation, be sure to try Asylum. It's not my favorite, but maybe it could be yours!