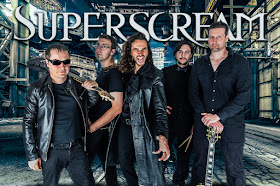 A while ago, Superscream released their latest record The Engine Cries. DutchMetalManiac's Tim van Velthuysen recently interviewed their guitarist Phil Vermont about this album, among other things.

Thanks! We really tried to give the best of ourselves with this album, we are delighted it is so much appreciated!

You already recorded The Engine Cries in 2015, but you released it in May last year. What was the reason for this?

There are two reasons for this. The first one is that each of our agendas did not allow us to work continuously on the album. We therefore had to schedule one week here and then one week there the next month and so on… Eric, (our singer/producer/multipurpose man) is leading his career as a lyric singer and he is very much asked for. As for me, I am a professional guitarist and very much asked for too. As you can guess, our agenda are overbooked, as well as those of the other members of the group. If Superscream is a priority for us, we cannot yet make a living on it, so we must plan our time at best to conciliate our jobs and our commitment in Superscream.

The second reason is that we really wanted to give our best in this album and leave nothing to chance, be it the music and production or visual and promotion. It takes much time to set this in a professional manner, all the more since most of these aspects are managed by members of the group.

The cover of The Engine Cries is really nice! What is the story behind it?

We wanted a visual which would be really representative of the contents of the album. We set up together the specifications and then Eric was in charge of the work with the graphic designer. We wanted to inspire ourselves from Caras Ionut, a surrealistic artist and mix with somehow steampunk aesthetics. Eric found the idea of the machine on the rough sea and forwarded all this to Stan W. Decker who understood very fast where we wanted to go and made up this image. Afterwards, they went on working together to develop these ideas on the booklet and the rest of the cover.

When you compare The Engine Cries to your first album Some Strange Heavy Sound, what is it you notice?

To me, this album is in all respects superior to the first one! As the composer, I really have the feeling that this second album is more mastered than the first one. I paid a very special attention to the fact that refrains be very catchy and that apart from merely instrumental passages we really have songs that might be performed with an acoustic guitar and voice.

The production also evolved al lot; the sounds of guitars and bass are much better. We had more material available for this album and we mastered it differently from the first one. Another important difference is that the first album had been recorded with professional musicians pals, but this was not yet a real group, it was most of all a common project with Eric.

I think the solos too are better structured, and I tried to make each of them tell something by avoiding pointless virtuosity.

The musicians who play on this album are the same as for the live. We rehearsed the pieces together before entering the studio and I think that the good vibes in the group and the friendship that links us shows up on this disc.

As for the lyrics too, things have changed. Eric signed most of the texts, except two which were written by Stéphane, our bassist.

In fact, everything has evolved since our first album!

You also use some non metal/hardrock things in your music like ethnic elements, jazz and percussion of all kinds, which makes it really nice. What was the idea behind this?

This idea of “musical opening” is Superscream’s very concept! When I imagined this project, I wanted to make music which would give metal and hardrock lovers what they feel like hearing, but which would go further and also offer something different, unpublished. Miscegenation is to my point of view the best way to suggest something new and anyway, when you look backwards at the history of music, it is often verified! And then, in a time when everything is compartmentalized, when people tend to retire into themselves, it’s not such a bad idea to abolish some boundaries, isn’t it?

Do you have boundaries you don’t cross with your music? If so, what are those boundaries?

Yes, of course! But rather than speaking of boundaries, I prefer to speak of setting up a frame. It’s this frame which defines Superscream’s sound. There are a certain number of limits I set to myself when I compose or direct the musicians, to stay in the frame of Superscream. Anyway, this frame is very wide! Roughly, the dominating aesthetics must remain hard rock and metal, even if we mix with other styles. We also avoid “very 80’s” productions with synthesizers too much forward and archi-reverbered snares.

It is also always mandatory that, despite of miscegenation, the pieces remain coherent and fluid. We do not want the different parts to look like a “collage” as we can hear with other prog groups. We strive to have nothing “pointless” in the writing and that each part is justified! Here you are, I’m sure there are many others, but these are the first ones which come to my mind.

For releasing The Engine Cries, you signed to Send The Wood Music, what makes them the best option for Superscream at this moment?

We received several proposals for signing in the USA, but we wanted to stay in France to keep some control on what was going on for distribution. Send The Wood are distributed by Season of Mist who are a very influent actor on the metal scene in France. This was a determining element when the choice had to be made. The future will tell if it was a good decision or not…

Since The Engine Cries is already released for a while, are you already working on some new material? If so, can you already tell us something about it?

Not yet because we are working on the production of the live DVD. But while composing The Engine Cries, I wrote more than 20 titles which all have already been laid out with the group, so we already almost have enough to make a third album. There may be a very long piece around African musics since it’s a concept I would like to develop on this next album. I’ll dive into it as soon as the DVD is completed.

Where do you get your inspiration from?

First, as a professional guitarist, I had the chance to participate in many projects and play lots of different musics, as well as Eric. It remains a great source of inspiration to me. Then there are also prog groups as Dream Theater, Haken and also all the 70’s groups such as Led Zep and Deep Purple which are absolute references to me and the other members of the group, and so are also inexhaustible sources of inspiration. To end with, I love traveling and it’s eventually the way I see Superscream’s albums: a musical journey, a sonic adventure!

Your biography also states that you’re working on a live DVD, can you already tell us something about that?

Yes, we spent a week’s residence at the Arcade to build a real show with scenography, décor, etc. The concert was filmed with many cameras and the music was recorded live. It was a risked bet since we had not yet issued The Engine Cries and our public did not know yet a big part of the titles we played! But happily enough, all this worked very well and the public proved to be very warmhearted and receptive to these new pieces, as you’ll be able to see soon. I’m mounting all this, but I can tell you as of now that it’s gonna be heavy stuff!

Can we expect some Superscream shows soon? Maybe coming to The Netherlands?

We’re working on it! The group is ready to hit the road, but for now we did not succeed in organizing a tour to promote The Engine Cries. We hope it will happen soon… Maybe when the DVD is released? To be continued… Anyway, we’d be delighted to come and play in your beautiful country!

Thanks for your answers! Is there anything you want to say to our readers?

Yes, for those who would like to discover the group after this interview, you can view our clips on our Youtube channel, as well as a lot of rather funny videos we made for the promotion of the record. Besides, a new clip and a little surprise should appear to keep you patient until the DVD is released... Meanwhile, you can also listen to us on Deezer, Spotify, etc. Stay tuned!