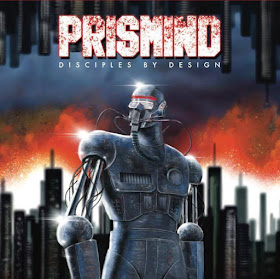 With 80 some odd years of experience between these apt, able and astute musicians, I don’t even know what I’m doing here. I have at least 40 years on this planet of notable experience in being a fan, spending hard earned money buying pre formed plastic that contains “grooves” and that’s about it; these lads have written part of the book of “Encyclopedia Rockicka”.

Possibly one of the most astounding albums I’ve heard this year, combined with strength and a societal soul lacking in most humans, this record needs to be shelved everywhere, in all homes as a substitute for The Internet, perhaps as the new Encyclopedia Rockicka, recording musical talent and knowledge in one volume.

As most every song hyper-extends the current state of the human condition and the lyrical quality mirrors that of greats such as Rush, Iron Maiden, Queensryche, Annihilator, (well what did you expect) Blue Oyster Cult and many other lyrical talents, I cannot have a favourite song.

Actually ‘Slaves to the Machine’ is my favourite! Listen to the words, we’re there people. …”THE RAIN IS NOW THE POISON IN OUR MINDS” Yes! Great song and we do NOT have time to reconsider. If only wisdom, love and being a good person could come to us via osmosis. If you don’t listen to politicians listen to Prismind, they can educate you. I wouldn’t listen to rock stars, politicians or actors, normally but these lads have transcended conventional knowledge through a distinct blend of society, creative content and deep insight.

Of note is ‘Last Breath’ which exhaustingly sounds like what it might be like; a frenzied attack on your system and is sure to hammer the body when heard live. The frenetic drumbeats and highly intricate arrangement is reminiscent of early Yes and Metallica, superbly balanced all through.

Each song rocks equally, with frenetic beats, face-melter riffs and intricate arrangements. Beautiful musicianship and the heavy riffing at the outset of ‘Palace of the Mighty and the High’ pounds nicely and the sweeping full strums are a breath of fresh music.

Masterfully produced with crisp, sharp sound and all elements equally balanced, this is an absolute must for any prog-rock/metal aficionado’s collection.

Again 11/10 easy…and there will be more favourites from this album to come!