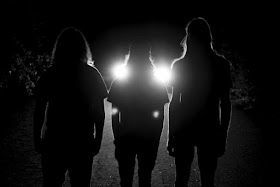 Virginia-based black metal trio, Unsacred, is currently out on the road supporting Noisem on a sixteen-date run through the Southeast US, with three dates also including Homewrecker. Having already burned through Louisville, Nashville, Birmingham and Jackson, Tampa and Pensacola, the tour rages into Orlando tonight and then blazes straight up the East Coast before smoldering to a close in Baltimore on August 9th.

For the tour only, Unsacred is packing a new limited version of their Forcefield Records-released debut album, False Light. In addition, the band has an untitled cassette tape with two brand new songs -- "Repetition (Worthless)" and "Kingdom" -- limited to a one-time run of 125 copies. The new tracks were recorded at Rusty's by Ricky Olson and the artwork was handled by Will Mullery

False Light is available from Forcefield Records on CD here and LP here, through BandCamp here and iTunes here,