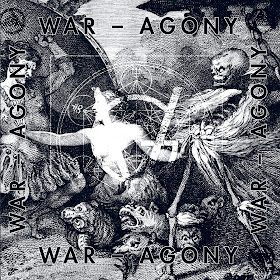 Grim Vision, founded in Germany in 2013 plays a furious mix of hardcore and dark metal as they say themselves. On August 28th they will release their War Agony EP containing three tracks.

War Agony is furious, that's for sure, but is that a good thing? No, it isn't in my opinion. These three tracks are full of drums and guitars which are only there to make a wall of sound. Vocally it isn't that good either: just shouting. Structure is hard to find in this EP, which makes it all an incoherent release. It sounds like four angry men who have to release their anger, they put it in their music and they don't bother if it sounds like shit. But, they have reached one thing they promise, it is furious as hell!

As you can read above, I don't like this EP, but maybe you do and you totally disagree with me. So, give it a shot. You'll never know if you don't try.